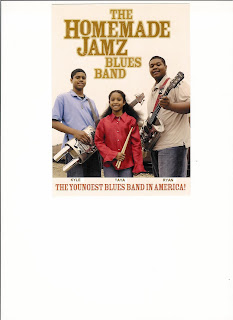 Homemade Jamz Blues Band is performing at this Friday, June 6 at the 19th Annual B.B. King Homecoming Festival.  The band consists of the Perry siblings Ryan (16) vocals and guitar, Kyle (13) bass, and sister Taya (9) drums.  This family is from and they are the youngest blues band to sign with a major record label, NorthernBlues Music.  Homemade Jamz won the 3rd MS Delta Regional Blues Challenge in Indianola two years ago when they were even younger!  They represented the Mississippi Delta Blues Society of Indianola at the 23rd International Blues Challenge in a field of 157 blues bands from all over the world.  Homemade Jamz Blues Band won in the Band Competition.  Those present will never forget the standing ovation they received during the finals.

The band has since appeared on national TV, been featured in numerous blues publications, performed on the Legendary Blues Cruise and is booked on a second cruise, plus they are very much in demand on the festival circuit.  The band is scheduled to tour parts of this year.  Not only are these young musicians very talented, they possess a stage presence that captivates their audience.

Homemade Jamz first CD is named Pay Me No Mind.  It has been described as “they blend Chicago and Mississippi juke joint blues, copping the gritty slickness of the former and the dirty soul of the latter…..never betraying its authors’ age.  The trio exudes nothing but confidence and attitude as they sing of betrayal, love, hard times and other bad things gone down as if they’ve lived a life rich in strife.  They are, to be sure, a veritable blues explosion poised to make a big sound.”

Homemade Jamz Blues Band will, also, be performing at the Highway 61 Blues Festival in Leland on Saturday, June 7.